Analysis and solution of common defects of tensan Red Glue

2020-12-23
Tensan Red Glue is a red paste uniformly distributed with hardening agents, pigments, solvents, and other adhesives, mainly used to fix components on the printed board, generally distributed by the method of adhesive or steel mesh printing. With the development of The Times, the application of patch adhesive is more and more. Although the application is single, many users still encounter various problems in use, such as uneven dispensing, empty punching, glue nozzle blockage, etc., such as wire drawing/tail dragging, collapse, etc., which occur in steel mesh printing. The following is a patch red adhesive common defects analysis and solutions
1. Common defects: blank typing
Causes: There were large clumps mixed in the patch glue, which blocked the distributor nozzle; Or there are bubbles in the patch glue, there are empty spots.
Solution: The micelles in the injection tube should be Debubbling treatment, or the micelles should be used to remove the large particles and bubbles.
2. Common defects: glue nozzle blockage
Causes: the amount of glue coming out of the nozzle is low or there is no glue coming out. Generally, the reasons are that the pinhole is not completely cleaned, the patch glue is mixed with impurities, the hole is blocked, and the insoluble glue is mixed.
Solution: Maintain the cleanliness of the dispensing head, actively replace the dispensing head with a new one, and replace the patch adhesive of good quality.
3. Common defects: component displacement
Causes: In general, components shift after patch adhesive curing. In severe cases, when the pins of components are not on the bonding pad, the amount of glue produced during patch adhesive sizing can be checked first to confirm whether it is not uniform. For example, one more than one less glue in two points of chip components; Secondly, check whether the element shift is caused by the low initial adhesive force of the patch adhesive. In addition, it can also be confirmed whether the PCB after gluing has been placed for too long, resulting in the patch glue has been semi-cured.
Solution: First, check whether the glue nozzle is blocked, eliminate the uneven phenomenon of glue, and replace the needle if necessary; Secondly, adjust the working state of the tensan machine, replace the new tensan glue and debug it.
Finally, it should be noted that the PCB should not be placed for too long (less than 4h) after gluing.
4. Common defects: wire drawing/trailing
Cause: The so-called drawing, that is, the patch glue will not break when the glue is applied, and the glue head will be filamentous when it is moved. More wire, tensan glue on the printed board bonding pad, will cause bad welding. Patch adhesive wire drawing is mainly affected by its main component resin wire drawing property and the setting of point coating conditions. Therefore, the causes may be too small inside diameter of the glue nozzle, too high adhesive pressure, the too-large spacing between the glue nozzle and PCB, expired or poor quality of the patch glue, the too-high adhesive of the patch glue, too much quantity after being taken out of the refrigerator, etc.
Solutions:
A. Change the glue nozzle with a large inner diameter, reduce the glue point pressure, and adjust the height of "stop", which will reduce the production beat.
B. Change adhesive and select the patch adhesive suitable for viscosity. The lower the viscosity, the high the solubility of the material, the smaller the tendency of drawing, so we should try to choose this kind of patch adhesive.
C. Return to room temperature (about 4h) after taking out of the refrigerator, and adjust the amount of glue. Set the temperature of the thermostat slightly higher, and compulsively adjust it to a patch adhesive with low viscosity and high shake/dissolve ratio; In this case, the storage life of the adhesive and the pressure of the dispensing head must be considered.
5. Common defects: collapse, caused by excessive fluidity of patch adhesive
Cause: there are two kinds of collapse, one is the point after besmear placed too long caused by the collapse. If the patch adhesive is extended to the pad of the printed board, it will cause poor welding. Moreover, for those components with relatively high pins, the collapsed patch adhesive can not reach the main body of components, which will cause insufficient adhesion. Because of the prone to the collapse of the patch adhesive, its collapse rate is difficult to predict, so it is difficult to set the initial amount of dot coating. 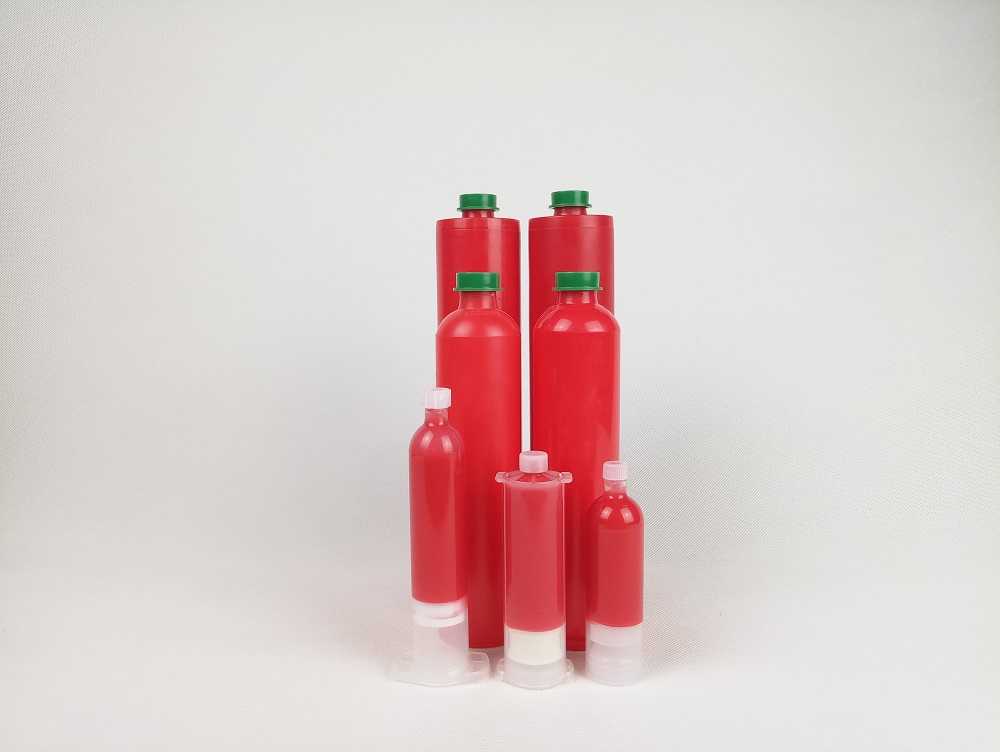